Parts of a Cell

The Cell Packs a Punch!

For its size, the cell has quite a complex structure. Each part of the cell has to perform a unique function.A living cell is like a tiny chemical factory. It has a control center that tells it what to do and when to do it. It has a tiny power plant that generates energy. And it has various machinery for making its products or performing its services.

The cell has two main parts – the nucleus and the cytoplasm. 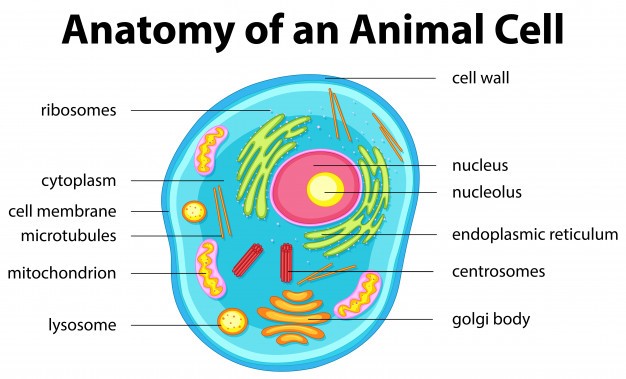 This is the control center that directs all the activities of the cell. It is the heart of the cell. It contains thread like structures called Chromosomes, which are made up of proteins and DNA. DNA stands for Deoxyribonucleic Acid. Each chromosome contains genes-the basic units of heredity. Genes determine what characteristics to pass on to the next generation. The nucleus also contains Nucleoli, which hold RNA and other proteins, and help in the formation of Ribosomes. Ribosomes are the center for protein production. RNA stands for Ribonucleic Acid.

The nucleus is surrounded by a Nuclear Membrane that controls which materials can move in or out of the nucleus.

The cytoplasm surrounds the nucleus. It has many tiny structures within it, called Organelles, which are responsible for many of the cell’s activities.

Mitochondria produce almost all the energy that the cell requires to live and to work. They are power producers.

Endoplasmic Reticulum is a complex structure that is responsible for the production of proteins and their transport between various regions of the cytoplasm or between the cytoplasm and the nucleus.

Centrosomes are organelles mainly found in animal cells next to the nuclei and are responsible for cell reproduction. They contain microtubules known as centrioles that help in cell division.

Lysosomes are round bodies containing digestive enzymes which help in breaking down many substances, such as harmful bacteria.

Golgi Complex or Golgi Apparatus is yet another vital part that acts as the packaging center of the cell, responsible for taking in proteins, modifying them, and then packaging them into containers called Vesicles. These proteins are later shipped out of the cell. The Golgi apparatus also produces lysosomes.

Chloroplasts are organelles found only in the cytoplasm of plant cells that contains a green substance called Chlorophyll which helps in the process of photosynthesis.

The nucleus, the cytoplasm, and all the organelles within it are all enclosed by the cell membrane. Most cell membranes are double-layered and their main function is to allow material in and out of the cell.