The Dynamics Of Our Solar System

Home | The Dynamics of our Solar System

How did the Solar System form?

All stars are created out of huge clouds of dust and gas in space. The forces of gravity pull these gas and dust particles together over millions of years to form a tightly-knit star. Gravity continues to act until it’s a thick dense ball with all the gas squeezed out. The squeezing action makes the object very hot and it begins to glow. That’s how a star is born!

Our sun, earth, all the planets, and all other objects of our solar system were formed in exactly the same manner – one giant cloud of gas and dust called an interstellar cloud, which settled down to create these objects. Our solar system is estimated to be about 4.6 billion years old and the entire process of stellar creation took about 100 million years!

We call this the Nebular Theory (nebula is the Latin word for ‘cloud’).

Our nearest neighbor in the skies is the moon. Not near enough! It is 238,900 miles away. If you drove all across the United States from New York to San Diego you’d travel about 2,800 miles. The moon is 85 times further away than that! To get to the moon at the same speed as your car would take you nearly 6 months! (That’s why we built rockets to get there faster).

All objects in the universe are ‘astronomically’ distanced from one another. The sun is 93 million miles away from the earth on average. Most of the faraway planets such as Jupiter or Saturn are even further away from the sun. And the other distant stars are even farther! 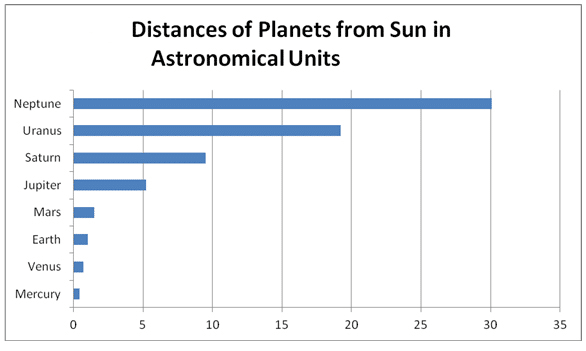 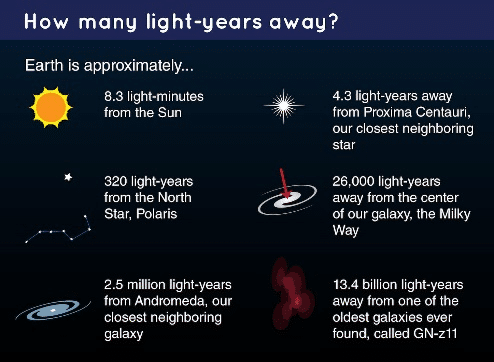 Even the Astronomical Unit (AU) is not good enough to measure the distances to outer space and distant stars. Astronomers invented the term ‘Light-Year’ for even larger dimensions. One light-year is the distance traveled by a beam of light in one year, and that is about 6 trillion miles! Our nearest star Proxima Centauri is 4.3 light-years away. A nearby galaxy named Andromeda is a whopping 2.5 million light-years away!

Fun Fact: A collection of stars is called a Galaxy. Our solar system is a small part of the ‘Milky Way’ Galaxy. Why is it called so?