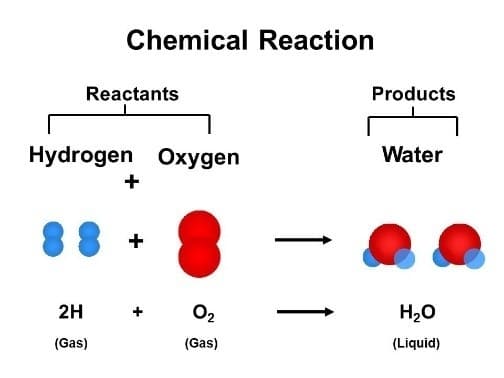 Chemical reactions are occurring all around us. Some everyday examples are –

Chemical equations need to be balanced. This follows the law of conservation of matter wherein matter can neither be created nor destroyed as a result of a chemical reaction. In other words, the number of atoms of each element in an equation must remain the same on either side of that equation.

In the equation to create water, if we simply wrote:

Right side: 2 atoms of hydrogen (represented as H2) but only one atom of oxygen (O).

This is an unbalanced equation!

To correctly balance equations we make use of Coefficients. A number written before an element is known as a coefficient.

Since oxygen atoms are unbalanced, we add “2” before the water molecule H2O to correctly show 2 atoms of oxygen on the right.

(Note 1: An equation cannot be balanced by adding or removing a subscript – for example, adding a subscript to oxygen on the right side to show “H2O2” might balance the equation but it is chemically incorrect. This is because H2O2 is a completely different substance – hydrogen peroxide – compared to water – H2O).

Thus:H2(g)+ O2(g)→ 2H2O (l) helps balance the oxygen atoms on either side but leaves the hydrogen atoms unbalanced. The hydrogen count of atoms is 2 on the left side and 4 on the right. The equation is still unbalanced!

To completely balance the equation, we need yet another coefficient “2” on the left side before the hydrogen element.

Left side: 4 atoms of hydrogen and 2 atoms of oxygen

Right side: 4 atoms of hydrogen and 2 atoms of oxygen

In molecular terms, 2 molecules of hydrogen combine with one molecule of oxygen to give two molecules of water.

The equation is now balanced!

Balancing a chemical equation is the first step to performing what chemists call Stoichiometry – using the balanced equation to determine amounts of reactants and products. It provides chemists, who have to deal with large quantities of actual substances, a way to understand the atomic world of atoms and molecules in terms of the real world of mass of substances.

To do this, chemists convert units of substances to Moles. Chemists have defined the mole of any substance in equivalent terms to the mass of atoms in 12 grams of Carbon-12. In other words, 1 mole of carbon weighs exactly 12 grams. Using comparative atomic masses between Carbon and other elements, the weight of other elements is determined. Hence, 1 mole of hydrogen weighs 1 gram, 1 mole of oxygen weighs 16 grams. And so on.

Learn more about Basics of Chemical Reactions and other important topics with 8th Grade Science Tutoring at eTutorWorld. Our expert science tutors break down the topics through interactive one-to-one sessions. We also offer the advantage of customized lesson plans, flexible schedules and convenience of learning from home.