Has anyone ever told you that you look like your Mom or your Dad? Or that you have the same eye color? Or that you walk just like your Granddad? This is heredity. What you are is what you have got from your parents and them from theirs.  Every living organism has a way carrying their ‘legacy’ forward by a process called reproduction.

All living things pass on characteristics from parents to offspring – humans, animals, plants, bacteria and other microscopic organisms. That is why a dog has pups, why all fir trees look alike, why human beings have human children.

All offspring don’t always look alike though. There are differences in height, skin color, hair texture, shape of hands, etc. Let us see how.

The Process of Heredity

Long threadlike bodies in the nuclei of our cells, known as Chromosomes, control the process of heredity. Chromosomes are made up of proteins and a substance called DNA which carries specific chemical instructions named Genes. These genes are the basic building blocks of heredity and are responsible for transmitting characteristics from one generation to the next. 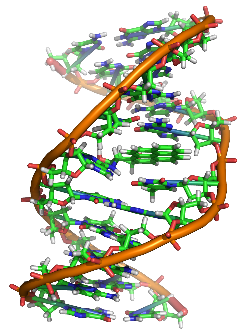 The process of creating offspring, the next generation of living creatures similar to your own, is known as Reproduction. Most animals reproduce through a process of fertilization wherein each parent releases either a sperm or an egg which must both meet in one place in order to start the reproduction process. Characteristics of both parents are transmitted via these sperm and egg cells. This process involving two parents, one male and one female, is termed as Sexual Reproduction. Higher organisms including humans and most mammals reproduce sexually.

Some animals however reproduce asexually, the simplest of which is Binary Fission, in which one cell, which may well be the entire organism, splits to form two cells. Single-celled organisms such as Amoebae reproduce in this manner, termed Asexual Reproduction. There are many other forms of asexual reproduction such as fragmentation, regeneration, budding, spore formation, and so on.

Lower organisms typically reproduce asexually. Although cells are involved in asexual reproduction, there is very little variation in the offspring – they are exactly identical to their single parent.

The Laws of Heredity

The greatest contribution to the field of heredity was made by Gregor Mendel who proposed the Laws of Heredity, which pretty much described today’s understanding of chromosome pairs and genes but were formulated long before their discovery. Mendel’s path-breaking work led to the birth of the scientific study of heredity called Genetics.

Learn more about Heredity and other important topics with 8th Grade Science Tutoring at eTutorWorld. Our expert science tutors break down the topics through interactive one-to-one sessions. We also offer the advantage of customized lesson plans, flexible schedules and convenience of learning from home.