All known, naturally occurring elements in the Universe, and some artificially created ones are represented in a standard format known as the Periodic Table.

The periodic table is composed based on the Periodic Law, which states that the properties of chemical elements recur in regular patterns when they are arranged according to their atomic weights. The periodic law was set forth by Russian chemist Dimitri Mendeleev.

The rows of the table are known as Periods and the columns are known as Groups. The elements are arranged in increasing order of their Atomic Number (which is the number of protons in the nucleus of the atoms of that element) from left to right and from top to bottom. 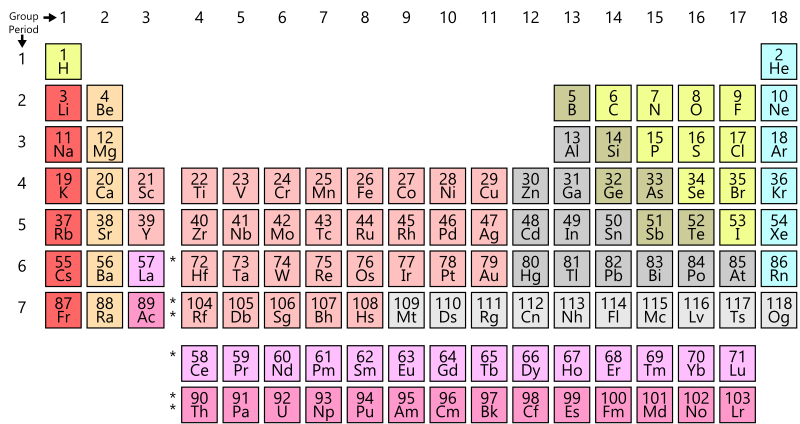 The rows represent a period number, which is the number of energy levels of the atom. An element in the third row, such as sodium (Na), indicates that the electrons of the sodium atom orbit in three energy levels. Elements in subsequent rows have increasing energy levels of orbiting electrons.

The columns represent groups or families of elements which look or behave similarly. The elements in each group also have the same number of electrons in their outermost shell, known as the Valence Electrons, which determines their ability to participate in chemical reactions. Thus, elements in the same group have similar chemical properties. See also – Chemical Properties of Matter.

These metals mostly from the first group and are shiny, soft, and extremely reactive, bursting into flames or even exploding when they come in contact with water.

These form the second group. They are also soft, shiny, and quite reactive. They are found mostly in compounds and minerals, never in their natural form.

The groups 3 to 12 are hard, malleable, shiny, and good conductors of heat and electricity. These are the typical metals like zinc, gold, silver, iron, for example.

These span groups 13 to 17 and consist of the post-transition metals, such as aluminum, tin, and lead, which are poorer conductors of heat and electricity as compared to the transition metals.

Some of the elements in groups 13 to 17 are called Metalloids on account of their gradual transition from metals to non-metals.

The rest of the elements in groups 13 to 17 are non-metals such as carbon, sulfur, phosphorus, and oxygen. They include the Halogens in group 17 which are chemically reactive with alkali metals to form salts. Chlorine, fluorine, and iodine are some popular halogens.

Learn more about The Periodic Table and other important topics with 8th Grade Science Tutoring at eTutorWorld. Our expert science tutors break down the topics through interactive one-to-one sessions. We also offer the advantage of customized lesson plans, flexible schedules and convenience of learning from home.

Other Trends in the Periodic Table

There are many other trends observed in the periodic table apart from the atomic number, energy levels of orbiting electrons, number valence electrons, and the metallic character and chemical reactivity of the elements. One trend is the Atomic Size, which is measured by the Atomic Radius.

As the atomic number increases along any period, the additional electrons associated with this increase are packed into the same orbit or energy level of the atom. At this same energy orbit, the increased nuclear charge (due to addition of the proton) attracts the orbiting electrons much more strongly, making the size of the atom smaller along the row.  Atomic radius of elements therefore decreases along any period.

As one moves down any group, the atomic radius increases due to an increase in the orbits of electrons. Atomicradius of elements increases in size as you move down a group. 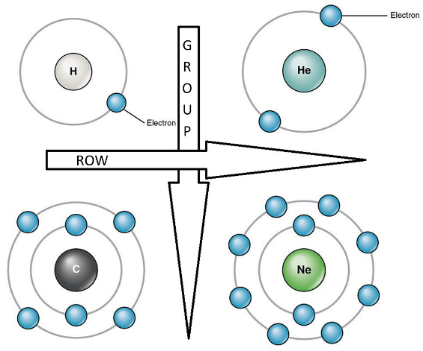