Changes in States of Matter

How does a Mercury Thermometer Work?

A thermometer shows temperature. The mercury inside the thermometer is sensitive to temperature – it expands when the temperature rises and contracts when it falls. This tells us how hot or cold it is around us.

The thermometer is an example of the effect of heat on matter.

Effect of Heat on Matter

There are primarily three physical states of matter – solid, liquid and gas. The tiniest of particles of matter – atoms – combine to form molecules, which are the building blocks for all forms of matter. These atoms and molecules are in constant motion.

When the matter is heated, the atoms and molecules start to vibrate even faster. As a result of increased molecular motion, the space between them increases. The matter expands and occupies more space. The motion and spacing determine the state of the matter.

Continuous heating of solid matter will melt the substance to form a liquid. Gold, when heated, past its Melting Point, will form liquid gold. The chemical composition of the substance remains unchanged – gold in liquid form is still gold atoms and molecules, nothing else. Only the physical form changes.

Sustained heating of a liquid past its Boiling Point will vaporize the substance into gas. 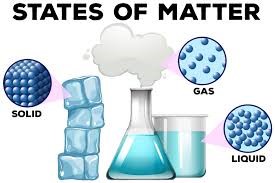 The Changing State of Water

Water exists in three states in nature. It is abundantly seen in its liquid form. In the liquid state it has a definite volume but can change its shape easily. The molecules of water are close to each other yet able to flow. It has a certain density. It cannot be compressed easily. And it is definitely visible.

Water has a boiling point of 100o Celsius (212oF). When water is heated to its boiling point you see it in the form of steam. The water from water bodies evaporates to form water vapor. Both are gaseous state of water. In this state, it has no definite volume or shape. It is also invisible. It can however be compressed easily.

Water has a freezing point of 0o Celsius (32oF). When water is cooled below its freezing point it forms ice, a solid. Water molecules are densely packed in its solid form. Although liquids contract when cooled, ice expands when it freezes because the molecules of water form a geometric pattern that takes up more space.