States and Properties of Matter

The Universe is made of Matter. The tiniest of particles, Atoms, combine to form molecules, which are the building blocks for all forms of matter. There are primarily three physical states of matter – solid, liquid, and gas. A fourth state, plasma, is very common in the universe but not so common on earth.

Solids have a form and do not undergo change in shape easily, such as wood or stone.

Liquids have no shape of their own and take the shape of whatever they are kept in, such as water or gasoline.

Gases have no definite shape or volume, they expand in all direction or they can be compressed in a small space, such as hydrogen or helium gas.

Plasma is formed by providing intense heat to gas, causing it to “ionize” – i.e. the electrons have escaped their atoms. It is commonly found inside stars in the universe. On earth it needs to be specially created. Some examples are neon signs, fluorescent lamps and plasma TVs. 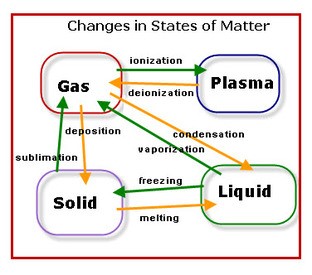 Another form of energy, Potential Energy, is associated with the position or condition of matter. It is associated with the matter at rest, yet having the ‘potential’ to do work in that state. Examples include the potential for a solid to fall from a height or for water behind a dam to flow to a lower position. Solids have higher potential energy due to the closeness of their particles. A solid with the ‘potential’ to fall down has more potential energy than a liquid in that position and least of all for a gas in that position. Hence, Potential Energy decreases as the fluidity of matter increases (from solid to liquid to gas to plasma).

Learn more about States and Properties of Matter and other important topics with 8th Grade Science Tutoring at eTutorWorld. Our expert science tutors break down the topics through interactive one-to-one sessions. We also offer the advantage of customized lesson plans, flexible schedules and convenience of learning from home.