The Structure of DNA

DNA (Deoxyribonucleic acid) is the molecule of heredity – it has the instructions that an organism needs to live, develop, reproduce, and pass those instructions down to the next generation. It is the master plan of life.

DNA molecules reside in chromosomes. Each chromosome has one long DNA molecule which is shaped like a Double Helix– two long strands with multiple cross-pieces – thus resembling a twisted rope ladder. The long, twisted strands contain alternate units of Phosphate and Sugar. The cross-pieces, or rungs of the ladder connecting the two strands, contain four chemical compounds – Adenine, Thymine, Cytosine and Guanine – called Bases. These bases occur in pairs on each rung. The base pairs are always A-T, T-A, C-G or G-C. This is determined by the chemical attraction between these compounds.

The structure of RNA

RNA (ribonucleic acid) is the “messenger” molecule which carries out the DNA’s instructions in controlling the production of proteins in cells. The structure of the RNA is similar to that of the DNA except that it’s a single strand structure and shorter than the DNA. The strand is a similar sugar-phosphate set of units but the sugar in RNA is Ribose (its Deoxyribose in DNA). Also, RNA contains a base called Uracil instead of thymine. The other three bases are the same. The typical base pairs in RNA are therefore A – U, U – A, C – G and G – C. 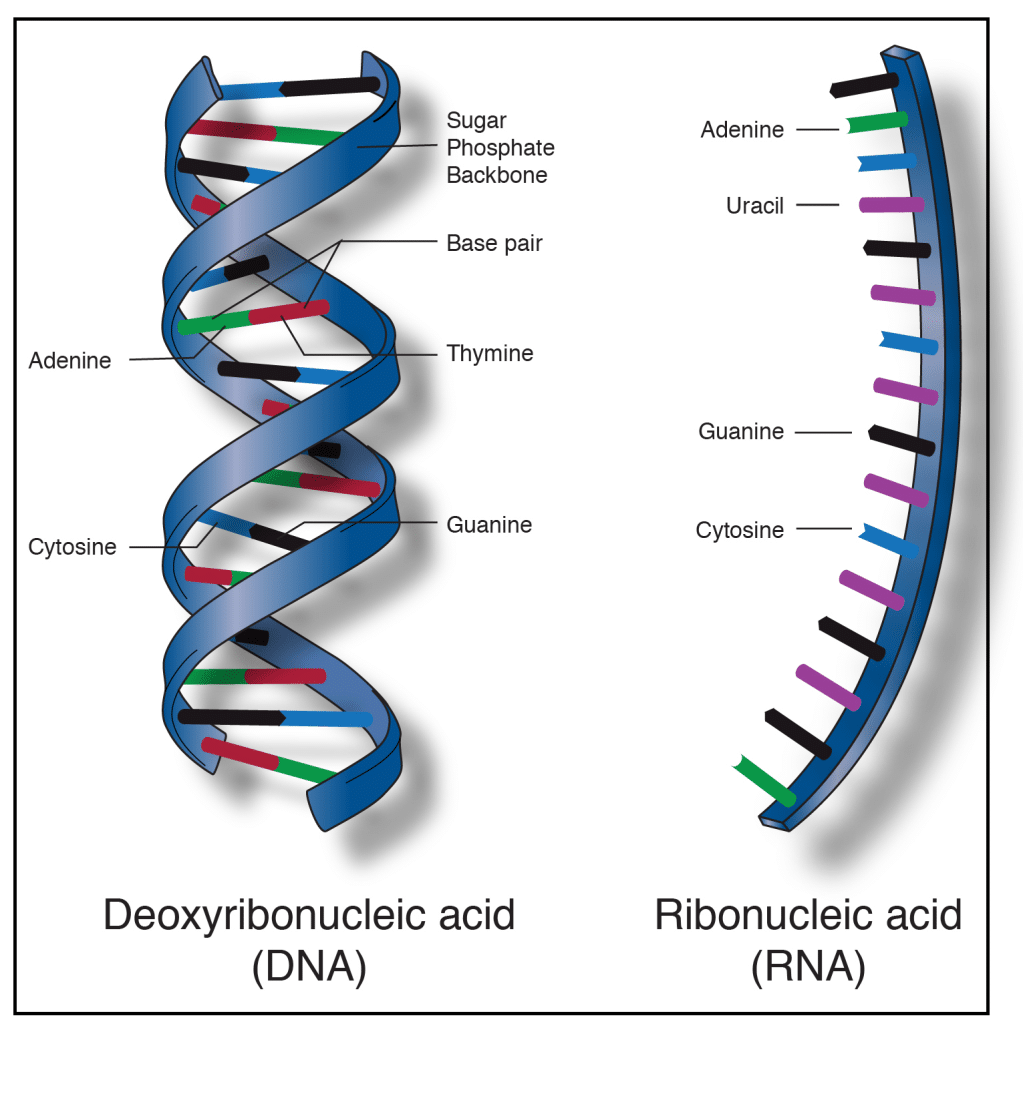 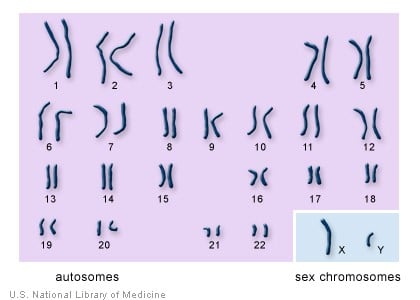 A complete DNA set including all the genes in an organism is called a Genome. It contains all the information needed to build that organism and let it grow and develop into an adult. There is a unique genome for each living organism.

Chromosomes in humans and in many other animals and plants are arranged in pairs. Humans have 23 pairs of chromosomes. 22 of these pairs are identical to both male and female of the species. They are called Autosomes. The 23rd pairis different between males and females, called the Sex Chromosomes. This pair is said to have an X and a Y chromosome. Their combination determines the gender in humans – males possess an XY pairing while females have an XX pairing.

The process of pairing and ordering all the chromosomes for an organism is known as Karyotyping. Here photographs of chromosomes are taken in order to study them or to detect abnormalities.

The zygote develops into an embryo, which is the beginning of a new individual. The embryo grows to become a fetus, developing internal organs and external features to slowly resemble the adult individual. A fully developed fetus eventually emerges to become a baby human being that has traits from both the parents.

Each cell of the new offspring gets a copy of the parent DNA through the reproduction process. As a result, the same genetic information as the parent is passed on to the offspring. The process by which this happens is termed Replication, whereby each DNA molecule gets copied to create two identical DNA molecules. This is a very crucial process and the basis for all biological inheritance. The DNA replication process copies and transmitsthe exact DNA sequence (the genome) to the daughter cells. This is a highly accurate and largely foolproof process, but mistakes can occur! For example, a gene may get inserted out of turn or may get deleted from the original sequence. Most such mistakes are fixed through a DNA self-repair process called Proofreading whereby incorrectly placed genes are repaired before the DNA synthesis process continues.

Learn more about Molecular Basis of Heredity and other important topics with 8th Grade Science Tutoring at eTutorWorld. Our expert science tutors break down the topics through interactive one-to-one sessions. We also offer the advantage of customized lesson plans, flexible schedules and convenience of learning from home.

Our Offer is Bigger than your Turkey!

Use Coupon BIG15 for 15% Off on all Tutoring Packs

TEST20 for 20% Off on Worksheets & Practice Tests Packs