Laws and Formulas of Motion

Ever played tug-of-war with one friend pulling the rope against you? If both you and your friend exert an equal force against one another, the rope will stay in its position. It’s the same if you try pushing a cart in opposite directions with the same force. However, if one of you is stronger than the other, you will be able to pull the rope toward yourself, or push the cart away from you, against the other force acting upon the rope or cart.

Imagine you’re trying to push a stationary car. You alone just cannot budge the car – you cannot overcome the force of friction between the car’s tires and the road. However, if a friend helps you in pushing then together both of you are capable to get the car rolling.

These examples establish that you and you friend are applying Concurrent Forces to get one net Resultant Force.

When concurrent forces interact with an object such that they do not produce motion in the object, they are said to be Balanced Forces. If such concurrent forces produce motion when they interact with an object, they are called Unbalanced Forces. An unbalanced force is therefore necessary to cause a change to an object’s position or speed or direction of motion or all of these.

Such forces and the motion of objects were first explained by Sir Isaac Newton in the Laws of Motion.

Newton proposed three laws. The first law is known as the Principle of Inertia. It states that an object at rest or moving in a straight line will continue to remain at rest or continue to move in the same straight line unless acted upon by an external force. In other words, there needs to be a cause – an external force – in order to create a change in the motion of an object.

Newton’s second law states that the change of motion of an object depends on the magnitude of the force – the greater the force the more the displacement. And, it depends on the object’s massif an identical force is applied on two objects, the change in motion will be more significant in the lighter object than the heavier object. The law further states that for an object with constant mass, the Force F equals the product of the object’s mass and the object’s acceleration. F = m * a. The unit of measurement of force is called a Newton. Mass is expressed in kilograms and acceleration in meters per second2.

For example, if a car weighing 600 kilograms (it’s mass) has to accelerate at 10 meters per second2 (its acceleration) then the force needed to do so would be –

The third law states that for each action there is an equal and opposite reaction. For example, when you jump off a rowboat, the rowboat would move in the opposite direction. Or when you light a rocket, the explosive gases which are thrust downward propel the rocket to move upwards. 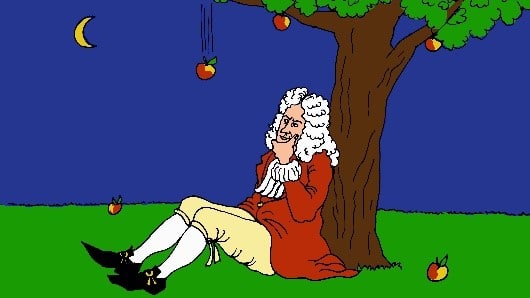 Learn more about Laws and Formulas of Motion and other important topics with 8th Grade Science Tutoring at eTutorWorld. Our expert science tutors break down the topics through interactive one-to-one sessions. We also offer the advantage of customized lesson plans, flexible schedules and convenience of learning from home.

The quantity of motion of a moving body is known as its Momentum. A swinging bat has momentum, a ball that’s been hit has momentum, in fact, every moving object has a momentum that is determined by the product of its mass and its velocity.

An important law of physics, known as the Law of Conservation of Momentum, states that the total momentum is conserved between two bodies that act upon each other without external forces. If two bowling balls of unequal mass and velocity collide, their total momentum before and after the collision remains the same – the momentum gained by one ball equals the momentum lost by the other. The formulas for force and momentum are used by physicists to correctly analyze the motions and paths of interacting objects.

Mass and weight are sometimes used interchangeably but they are not the same thing! Mass is a measure of Inertia, which is a property of all matter. Inertia is what makes a stationary object continue to be motionless or a moving object to continue moving. Greater the mass of an object, the more is difficulty to change its velocity. Mass is expressed in Kilograms or Pounds.

Weight is the gravitational pull on an object. In actual terms, it’s a force – the force of gravity on an object determines its weight. That’s why we would weigh differently here on earth as against on the moon. However, our mass would remain the same anywhere we go in the Universe. This also follows from the law of conservation of mass.