How Living Things are Classified

The wide variety and richness in diversity of all living things – plants and animals and all microorganisms – required scientists to arrange them all in related groups. This science of classification is termed Taxonomy. This ensures that each living thing has exactly one correct scientific name. The common names for that living thing although may differ in different parts of the world. Scientific names are mostly Greek or Latin in origin.

Scientific classification is based on these seven groups –

There are two major kingdoms – Animal kingdom and Plant kingdom. Four other kingdoms were later added to classify various microorganisms including fungi and bacteria.

Subsequent classifications under the kingdom follow strictly known facts about the organism to group them further. For example, all animals with backbones belong to the phylum Chordata. Within Chordata, animals such as apes, bears, and even humans, having hair on their body, belong to a different class (Mammals) in contrast to snakes, lizards, and turtles that have scales on their body (Reptiles). Mammals that eat flesh are considered of the order Carnivore. Other mammals such as those that eat insects are classified in the order Insectivore.

A typical taxonomy for the domestic cat, which is a flesh-eating mammal in the Chordata phylum of the animal kingdom is shown in the table. The genus and the species together uniquely identify any living organism in the natural world – Felis Catusfor the domestic cat, for example.

The animal kingdom is estimated to have over 7 million species while the plant kingdom has close to 400,000 species. Just about 1.3 million species have been cataloged in all. New species are discovered every now and then, even to this day! 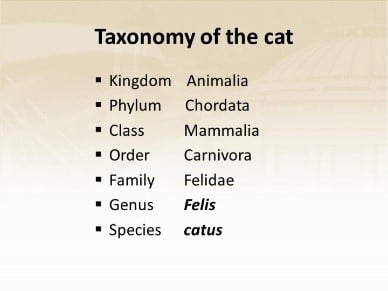 Learn more about How Living things are classified and other important topics with 8th Grade Science Tutoring at eTutorWorld. Our expert science tutors break down the topics through interactive one-to-one sessions. We also offer the advantage of customized lesson plans, flexible schedules and convenience of learning from home.