The climate at any location depends mainly on the following –

Let us understand this with some examples –

Mountain ranges are often high enough to not allow clouds to go over. Rain clouds which hit a mountain usually cause more precipitation, in the form of rain or snow, on the Windward side than on the Leeward side. Wind hitting mountains is forced to rise, making it cooler. Cool air holds less water vapor than warm air, forcing water vapor to condense on the mountain. It is also the reason why cooler temperatures prevail at higher altitudes and higher elevation. 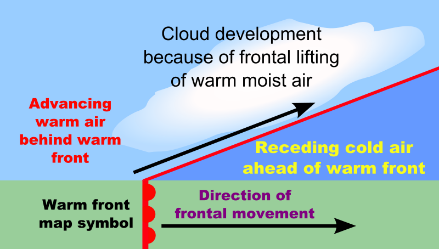 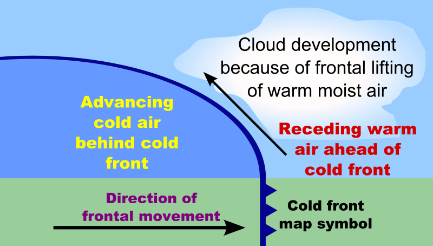 The water heats up and cools down much more slowly than land does. Thus the air over land gets heated much faster than the air over water. This hot air rises, creating an area of low pressure on land. Relatively cooler air from the ocean blows into this low pressure, causing sea breezes near coastal areas. Such moving air masses are called Warm Fronts and Cold Fronts of air. They affect the speed and direction of winds, temperature, cloud cover, and level of precipitation, in coastal areas.

Sea breezes are also responsible for causing precipitation in the form of rain and thunderstorms. Cool air from the ocean is laden with water vapor, which evaporates on the warmer land, causing rainfall. In peninsular areas such as in Florida, sea breezes from the east and west collide to cause thunderstorms. Tropical regions nearer the equator receive intense sunlight resulting in higher temperatures there. They witness periodic storms, hurricanes, typhoons and cyclones, both on land and at sea.

The ocean is the largest collector and storage space for solar energy. Due to its size, it absorbs huge amounts of heat. This heat causes currents in the ocean, much like in the air. Warm ocean currents raise the temperature of nearby lands while cold currents lower it. The warmth of the ocean eventually re-enters the rest of the earth’s systems and is responsible for reheating the atmosphere, evaporating water and even melting ice shelves on mountains.

Volcanic eruptions spew ash and dust particles in the atmosphere, reducing solar energy reaching the earth and consequently lowering temperatures in the region and even globally. Global precipitation also reduces as a result of volcanic eruptions.

Greenhouse Effect is a phenomenon in which gases like carbon dioxide, methane, nitrous oxide, water vapor, and ozone in our atmosphere absorb the sun’s infra-red radiation reflected from the earth’s surface by not allowing them to escape. This helps to maintain the earth’s ideal temperature for life to sustain. However, due to pollution in recent years, there has been a sudden rise in the levels of greenhouse gases, contributing to an increase in the overall temperature of the planet. We refer to this as Global Warming.

Much of these gaseous emissions are man-made. Chlorofluorocarbons (CFCs) present in aerosol cans, air-conditioners, refrigerators, fire-extinguishers, pesticides, and many such products deplete the ozone layer in the stratosphere, allowing more harmful radiation from the sun to enter the earth’s atmosphere. Much of the industry continuously spews the other greenhouse gases into the atmosphere. 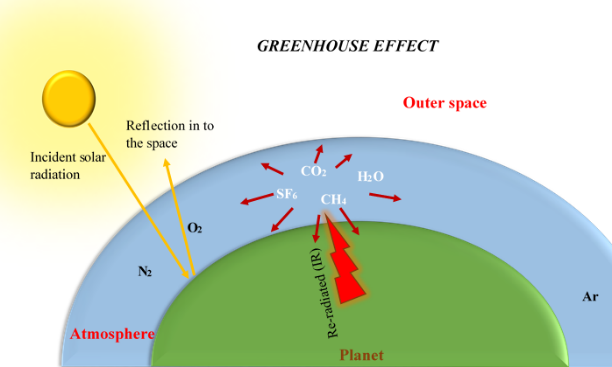 Unusual warming of the surface of the eastern tropical Pacific Ocean has a disruptive impact on ocean temperatures, ocean currents, and weather over large parts of the earth. This is known as the El Niño Effect. As a result of the warming, low-level winds start blowing in the opposite direction, from west to east, shifting tropical storms and hurricanes eastward from the ocean to the west coast of South America. It results in greater precipitation in the southern parts of the United States.

Climate forecasters rely on a variety of tools to study and keep track of weather patterns around the world. Some of these are –

Learn more about Tools Measurement and SI Units and other important topics with 8th Grade Science Tutoring at eTutorWorld. Our expert science tutors break down the topics through interactive one-to-one sessions. We also offer the advantage of customized lesson plans, flexible schedules and convenience of learning from home.