All known naturally occurring elements in the Universe, and some artificially created ones, are represented in a standard format known as the Periodic Table. Elements are arranged in increasing order of their atomic number (the number of protons in the nucleus). The rows of the table are known as periods and the columns are known as groups. The elements are arranged in increasing order of atomic number from left to right and from top to bottom.

Other periodic trends are also observed in the arrangement of the table, the atom size, for example, which is measured by the atomic radius of the atom. 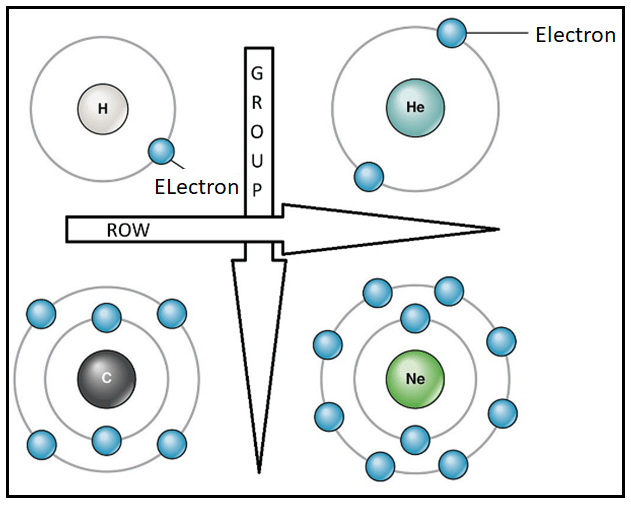 As the atomic number increases along any row of the periodic table, the additional electrons associated with this increase are packed into the same orbit or energy level of the atom. At this same energy orbit, the increased nuclear charge (due to addition of the proton) attracts the orbiting electrons much more strongly, making the size of the atom smaller along the row.

As one moves down the periodic table, i.e. down a column or group, the atomic radius increases due to an increase in the orbits of electrons. The atom is, therefore, larger in size as you move down the table.

Some columns or groups have been given special names based on the chemical properties of the elements in that column. Halogens for example are highly chemically reactive while Noble Gases have very low chemical reactivity.

One of the chemical properties of matter is that their atoms have a tendency to bond with other atoms. All atoms have electrons revolving around their nuclei in defined energy levels called orbits. The electrons in the outermost orbit are known as valence electrons. In any chemical reaction, these valence electrons are gained or lost between atoms, creating chemical bonds between the atoms.

Chemical bonds may be formed or destroyed as a result of a chemical reaction. Breaking bonds require energy while forming new bonds to release energy.

A chemical bond that involves a sharing of valence electrons (not an exchange of electrons) between two or more atoms is termed a Covalent Bond. This typically takes place between two non-metals, such as when two hydrogen atoms combine to form a hydrogen molecule, or when carbon combines with four hydrogen atoms to form methane gas.

A chemical bond that involves an exchange of valence electrons from one atom to another is termed an Ionic Bond. This typically takes place between a nonmetal and a metal. An example of an ionic bond is the combining of one atom of Sodium with one of Chlorine to create Sodium Chloride, which is a common salt.

A chemical bond that takes place between two metals is termed a Metallic Bond. The valence electrons are not just associated with a specific pair of atoms here, instead, they continuously overlap across a large number of neighboring atoms. Examples are gold, silver, iron, aluminum, to name a few.

Organic compounds composed of only carbon and hydrogen atoms are termed as Hydrocarbons. Multiple atoms of hydrogen and carbon combine in many different ways to create multiple types of hydrocarbons. In the examples shown, notice that in all the compounds Carbon has four covalent bonds around it while hydrogen has one. This means that they have a valency of 4 and 1 respectively!

Our energy sources such as crude oil, natural gas, coal and petroleum, are all hydrocarbons.

Fill in the Blanks:

Learn more about Chemical Properties of Matter and other important topics with 8th Grade Science Tutoring at eTutorWorld. Our expert science tutors break down the topics through interactive one-to-one sessions. We also offer the advantage of customized lesson plans, flexible schedules and convenience of learning from home.