In Geometry, we know how to calculate the area of a triangular plot of land.

We can also find the area of the plot, if it is in the shape of a rectangle or a Square.

All the shapes mentioned above (triangle, rectangle, square) are regular shapes, whose area can be found out by the known results called formulas.

Now, if we are given a shape which is not regular or standard one, then how do we find its area? We try to approximate its area by associating it with regular shapes.

For finding the area of such irregular shapes, area enclosed between two geometrical shapes we make use of Definite Integrals.

Here, we introduce the concept of Definite Integrals. 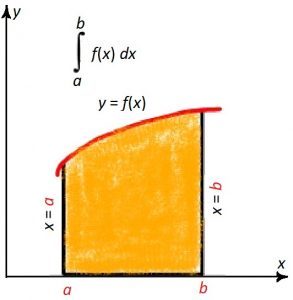 If f(x) be a continuous function defined on the closed interval [a, b] & F(x) is its antiderivative i.e.

The above statement is called the Second fundamental Theorem of integral calculus.

Note: The constant of Integration is not written here, as it does not change the final value of the definite integral.