What is the inequality in algebra? 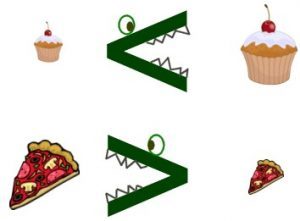 In real life, we come across many situations, where things are “not equal”; they may be “greater than” or “less than”.

An inequality is an expression formed using the symbols, <, >,  ≤or ≥.

A number line is the best way of showing inequalities. In a number line, let us take a and b are two numbers.

Inequalities can always be written in two ways.

Sometimes we compare two inequalities; in one like x is greater than 1 and less than 3. Then we write 1 < x > 3.

How do you solve inequalities? 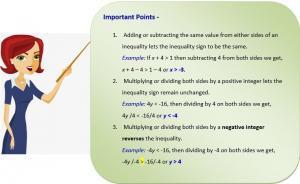 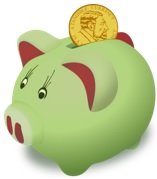 Marlo has a savings of $300 in her account. She wants at least $100 at the end of the month. She withdraws at least $20 every week for miscellaneous expenses like groceries, electric and rent. Write an inequality expression to represent the above situation, if she withdraws $20 for “w” weeks. 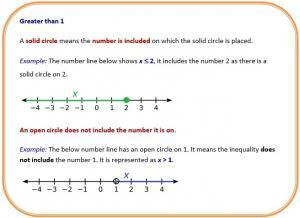 What inequality is shown here in this number line?

This number line denotes inequality greater than or equal to 1.

State which of the following statements is “True” or “False”.

Give Your Child The eTutorWorld Advantage

Research has proven that personal online tutoring not just cements school learning, it helps build student confidence. eTutorWorld provides the best K-12 Online Tutoring Services so you can learn from the comfort and safety of your home at an affordable cost.

Be it an exam, class test or a quiz, eTutorWorld’s Math, Science and English tutors are responsible for your academic progress. Meet your personal coach at your convenient day and time to get help for Grade 3-12 Math, Science and English subjects and AP, SAT, SSAT and SCAT Test Prep help and test practice. All our tutors are graduates and bring with them years of teaching experience to the tutoring lessons.

Our ‘Learning by Design’ methodology makes sure that each student is at the center of the teaching-learning process. All tutoring sessions start with a question to the student ‘What do you want to learn today?’ Hence, tutors diagnose your skills and recognize your requirements before the actual tutoring happens. Post every tutoring session, an individualized worksheet is emailed to the student to assimilate learned concepts. Regular formative assessments are used to evaluate a student’s understanding of the subject.

The state of the art technology used is stable, user friendly and safe. All you need is a computer or a tablet and an internet connection. The easy-to-use web conferencing software requires a one time download, using which the student can talk and chat to the tutor, annotate on an interactive shared whiteboard or even share documents, assignments or worksheets.

All tutoring sessions are recorded and made available for a month so you can review concepts taught.

Email or call our support team with any issues or questions – we are here for you 24X7.

Thousands have taken the eTutorWorld Advantage – what are you waiting for?

A Discount Sale to Launch Your Winning Streak*