Facts of the Great American Total Solar Eclipse of 2017

On August 21, 2017, the whole of North America will  witness the first solar eclipse visible from coast to coast after almost a century – 99 years to be exact!Every part of the US will witness either a total or partial solar eclipse.

Americans have waited a good 38 years to witness a solar eclipse. Parts of 8 US states (Oregon, Nebraska, Missouri, Kansas, Illinois, Tennessee, Kentucky and South Carolina) will view a total solar eclipse on a stretch of 70 miles. It’ll touch Oregon at 9.06 am on August 21, 2017 (Pacific time) and end at 4.06 pm (Eastern time). 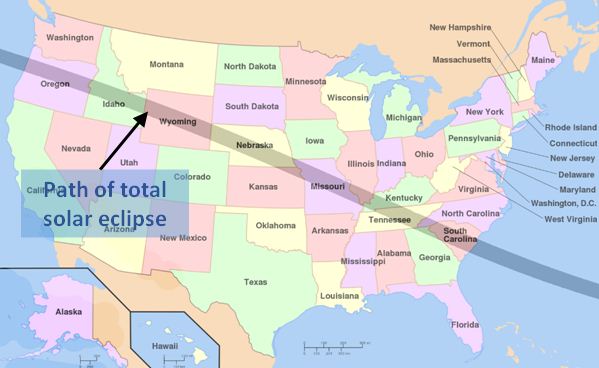 The shadow of the moon will completely cover the sun for 2 minutes and 40 secondsalong the center of the path of totality. During the total solar eclipse, you’ll not only see the night stars (during day time) but also 4 planets (Mars, Mercury, Jupiter and Venus) with the unaided eye near the eclipsed sun.

Moving towards the edge of the path, the duration of totality will decrease which may last only a few seconds. People on the area beyond the path of totality will witness partial solar eclipse.  If you are in the US and you miss this chance, you’ll have to wait until April 8, 2024 to witness the next solar eclipse…and it’ll be a different set of states.

Facts about any solar eclipse

So get set to view stars during daytime!